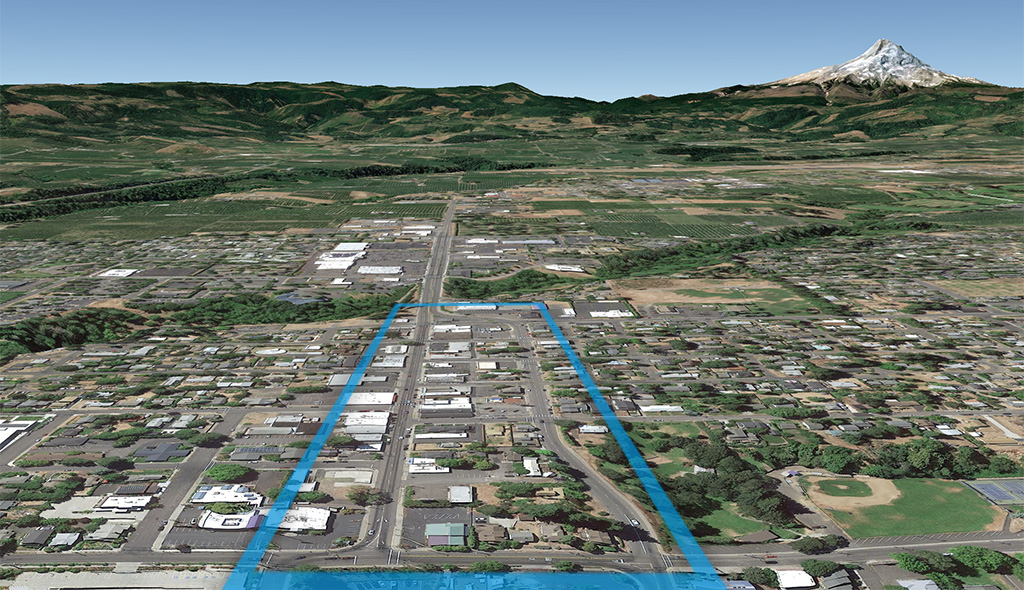 At its October 24 meeting, the Hood River Urban Renewal Agency Board (URAB) discussed the Heights Streetscape Project and reviewed the proposed scope of work for Phase 3 of the project. This phase will focus on the development of the preferred concept design and implementation plan to be carried out by urban planning consultant MIG.

After an extensive outreach and engagement effort where hundreds of community stakeholders provided input on the three alternatives for 12th and 13th streets in the Heights, URAB selected Alternative 3 as the preferred streetscape concept to develop a final plan. This recommendation aligned with input from local emergency service providers, Hood River County School District, Columbia Gorge Community College, and stakeholders, and was the highest scoring alternative from the Phase 2 public survey. The project was organized to have three design phases that would allow for periodic check-ins and adjustments to address issues identified by the project team or Agency.

Tasks included as part of Phase 3 work scope include the following:

Three additional design review meetings with the Urban Renewal Advisory Committee (URAC) are included in the work plan. The first covers findings from the revised scope of work, the second includes the presentation of a final concept plan, and the third presents a draft implementation plan. Following these meetings, the project team would make presentations and share URAC comments with the Agency’s Board. These meetings will provide opportunities for the public to hear about progress and comment on the ongoing work. Public input will be welcomed at any URAC meeting or by contacting City Planning Director Dustin Nilsen at D.Nilsen@cityofhoodriver.gov.

This project is funded through the Heights Urban Renewal District created by the City in 2011 to focus on improvements in the Heights, including those that address streetscape modifications to improve safety for bicycles and pedestrians along 12th and 13th Streets, which also serve as State Highway 281.

The City has issued a Request for Proposals (RFP) to create a feasibility study and final report for formation of a Westside Urban Renewal District. This concept has been discussed by the City for over a year, and was introduced to the Urban Renewal Agency Board last November. In September, City Council approved issuing a RFP for the study. Work is expected to be completed in about a year.

An urban renewal district is created with cooperation from tax districts (except education districts) foregoing property tax growth for a specific amount of time. These funds then create a revenue stream to fund projects in the district, such as improving public infrastructure. When an urban renewal district retires, its property tax growth is returned to the general rolls.