Improvements have been made to Hood River’s bicycle / pedestrian network in 2020 with the addition of the Wilson – A Street Bicycle Corridor. The section runs on Wilson and A streets between 10th and 18th (one block north of Belmont / Union Street). It is a rare continuous stretch connecting east-west sides of 12th and 13th streets to serve bike/ped traffic in the area and commuters to nearby schools to keep pedestrians and cyclists off streets with higher vehicle traffic.

The Wilson – A Corridor is the first step in a larger plan to expand the Safe Routes to School (SRTS) network in the Heights area. SRTS projects create neighborhood to school connections for children and adults who commute by foot and bicycle.

Conceptual outlines have been created for the next phase to include bicycle lanes along Pacific Avenue from 2nd Street to 12th Street connecting to the Wilson – A Corridor. This section incorporates improvements on a small segment of the Indian Creek Trail just north of Dutch Bros to Union Street. Phase Two would also connect the Wilson – A Corridor north along 18th Street to May Street and the existing Safe Routes to Schools network. These project segments, as part of the City’s Transportation System Plan (TSP), will require extensive engineering and redesign that will take more time.

More details about improvements and plans can be found in the City’s Summer 2020 E-News article.

Updated and adopted by City Council in May, to be expanded and improved in the future. 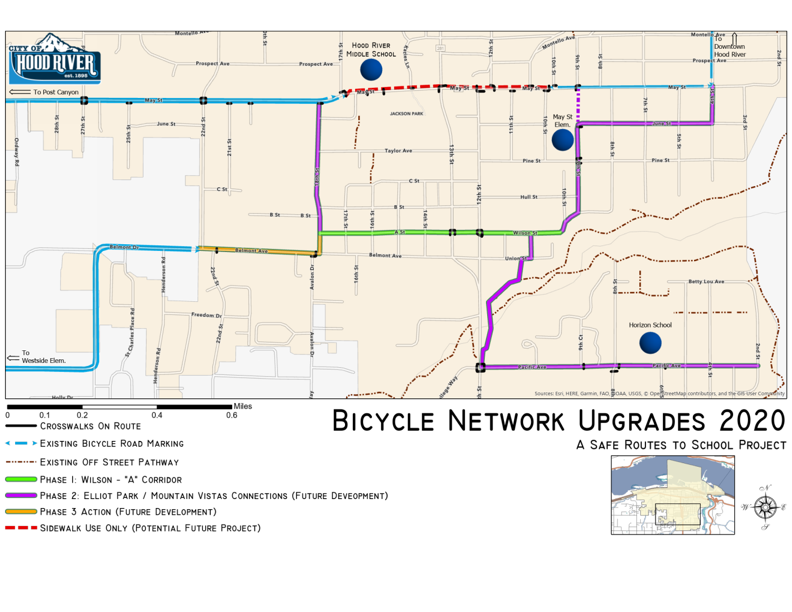