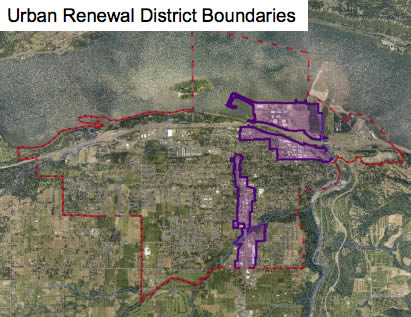 The financing mechanism works by dedicating future property tax growth to pay for redevelopment projects via loans. Redevelopment projects generate new taxable value that otherwise would not have existed without public investment, creating the revenue streams to repay the original project debt. The new taxable value is released to the general tax rolls benefiting all taxing entities after the urban renewal district debt is retired. In Hood River there are three urban renewal areas, Columbia-Cascade, Waterfront, and Heights District. Each distinct district retains its own tax increment revenues and funds are not commingled between the districts.

The Agency has a nine-member board consisting of the Hood River City Council and two elected members from the Port of Hood River. The Agency is responsible for performing all normal board duties, including adopting a budget. Agency members work in conjunction with a seven-member advisory committee, the Urban Renewal Advisory Committee. The advisory committee also serves as citizen budget committee members for the Agency. The URAC is very much a working committee, and the agency’s ambitious work plan in the future would not be possible without this dedicated group of volunteers.