New water, sewer and stormwater utility rates will be effective July 1st with smaller annual increases planned over the next five years. The new rate plan is the result of a Utility Rates Analysis. Recommendations were discussed in a series of three March Council meetings. 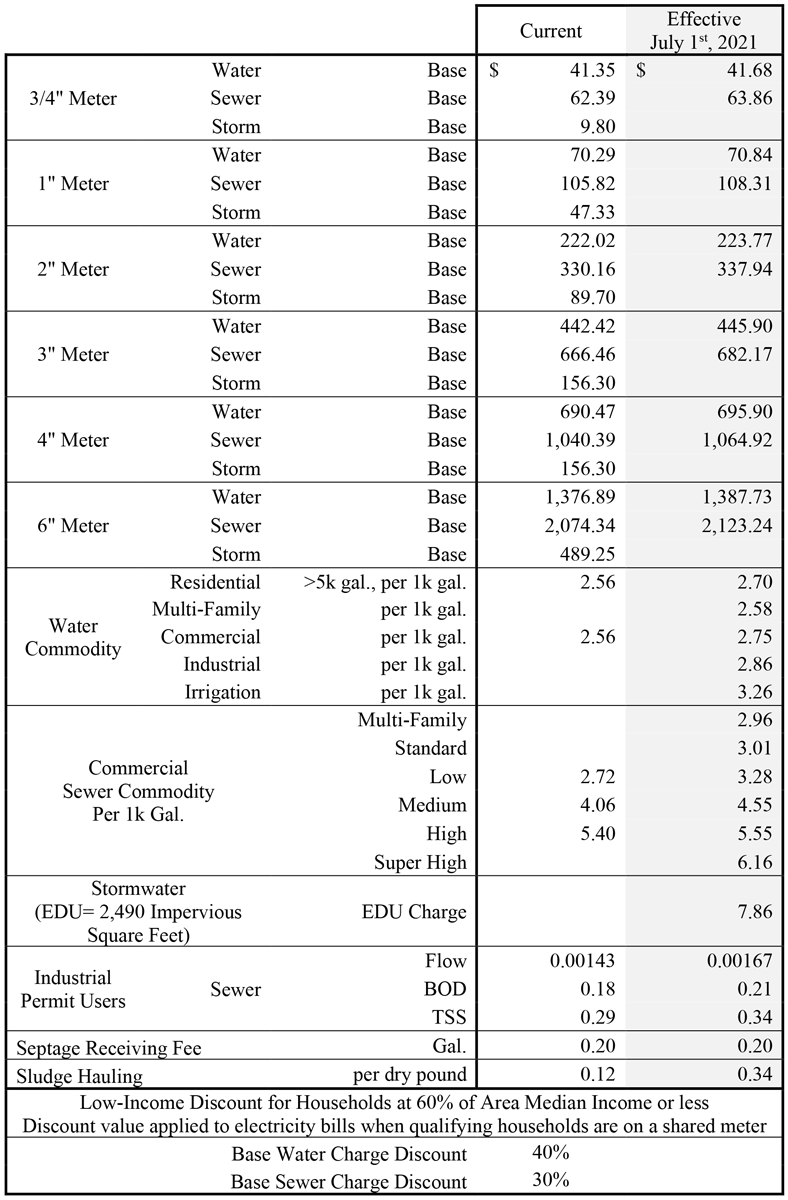 This is achieved in part by moving the basis for stormwater charges from meter-size to square footage of solid surfaces. The net result is that properties with large areas of hard surfaces (like parking lots) will pay a more fair share compared to homes and business with small footprints. The new rates also create a High-Strength Wastewater category for businesses such as breweries and considers their effect on the City’s wastewater infrastructure. Previously breweries and restaurants were charged similarly.

To fund ongoing maintenance and make progress on significant capital projects, the rate plan includes overall revenue increases of 3% for water and sewer and 14% for stormwater in the first year. The system-wide average rate increases will not affect all rate payers as explained. Resolution 2021-05 was approved April 12th.

“The major update in the new rate plan is that comparative use is taken into account,” said Will Norris, assistant city manager / finance director. “New rates are designed to slowly shift rate burdens. The shift moves more burden away from residential customers paying more than their fair share on to commercial and industrial users who have been paying less in comparison.”

The new utility rate plan picks up where the City’s 2015 five-year rate plan left off. That plan applied rate increases across all customer groups without regard to user burden on the system. The prior large increases were needed to make improvements to the City’s critical utility infrastructure. Major improvements completed over the last decade include a new waterline that replaced a 85-year-old line; a rebuilt reservoir that can store 2.5 days of drinking water; and a new wastewater treatment plant outfall that sends treated effluent away from the City into the main stream of the Columbia. Significant capital projects scheduled over the next 10 years are planned. The City will replace approximately 25% of its aging lead-jointed water lines and clay sewer pipes that are past their useful lives.

The new rate program is sensitive to lower-income household’s ability to pay added utility costs when overall housing costs are already high in the area. The new rate plan will fund an expanded low-income discount program through the Mid-Columbia Community Action Council. Outreach is planned to let qualifying households know of available discounts. A discount will also be applied to electricity bills (in partnership with Pacific Power) if a qualifying household receives City utilities through a shared water meter. This is more typical in multi-family or mobile home park developments.