Snapshot of HRPD and Facility

::    Snapshot of HRPD and Facility

Snapshot of HRPD and its current facility

The Hood River Police Department serves the City of Hood River, with over 8,300 full-time residents in 3.35 square miles of residential, business, industrial and recreational properties. The City welcomes a large influx of tourists and outdoor recreational enthusiasts seasonally and can exceed 25,000 people on the busiest summer days. 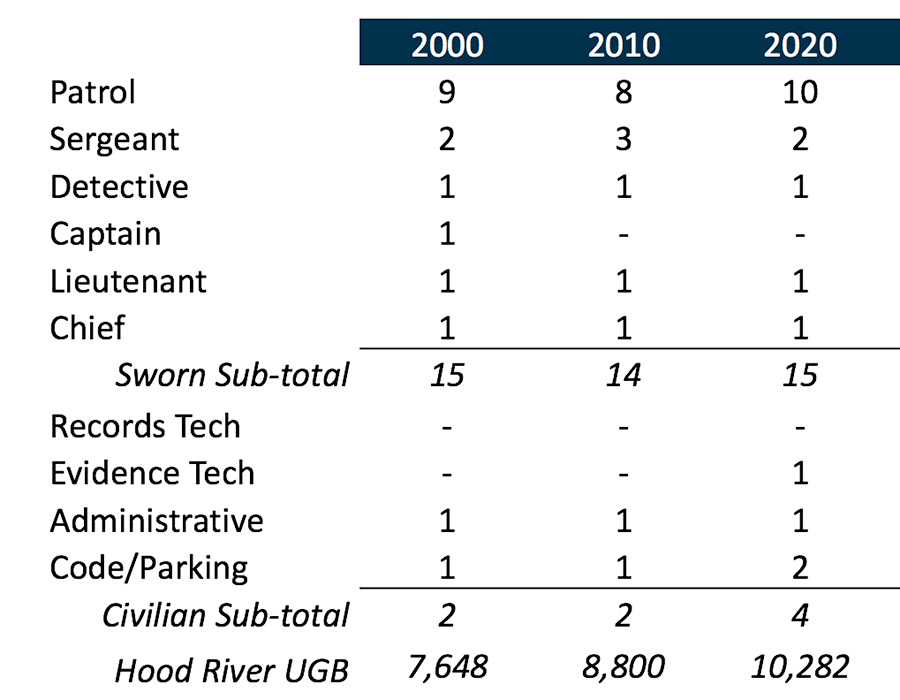 Protecting the lives, property, and rights of all people in both emergency and non-emergency calls within the City and surrounding areas is HRPD’s focus. The department employs 14 certified police officers, including a Chief, Lieutenant, two Sergeants, a Detective, nine Patrol Officers, and two non-sworn members: a Community Service/Parking Enforcement Officer and an Administrative Assistant. Department staffing has not changed since the early 2000s when the City’s population was 25% smaller than today. Growing and evolving community needs require a modern policing facility with updated training space and 21st century functionality.

The City of Hood River has no record of its Police department ever occupying a purpose-built facility. Instead department operations have periodically shuffled between sharing space at various government or privately-leased locations in downtown.

Prior to 2010, the Police Department and Municipal Court occupied both floors of 211 2nd Street where City Hall relocated. The move to the basement was meant to be temporary due to many shortcomings of the site. When the City consolidated offices, the basement received only minor updates since the space was unsuitable as a permanent home. The space lacks basic functionalities for modern policing and is unable to provide as is for growth.

Please send questions or input by email to Will Norris, Assistant City Manager at: w.norris@cityofhoodriver.gov