The City of Hood River has moved to next steps in planning for the community’s first-ever purpose-built police facility. After considering seven sites, City Council approved studying a preliminary design and development of cost estimates on the Columbia Lot between 5th and 7th streets. The City will also ask architectural firms to submit cost proposals to administer a joint planning exercise with Hood River County for a possible consolidated Police Department, Sheriff’s Office and Courthouse. A joint facility is contingent on the county funding its share of a facility and may be located at a yet to be determined alternative site. Either option will include full parking downtown replacement with the goal of increasing downtown parking if possible.

Another new development is expressed interest by Columbia Gorge Children’s Advocacy Center (CGCAC) to co-locate and contribute funding to the project to house its operation in 4,000 square feet of the proposed facility. CGCAC works closely with law enforcement and will benefit from utilizing shared offices, interview rooms, and common spaces with the Police Department.
Seven potential sites that could accommodate an adequately sized facility were analyzed and ranked by consultants and City staff based on International Association of Chiefs of Police criteria. Access, size/shape of site, costs to acquire and develop, central location, proximity to other government locations, security, and land use compatibility were major considerations. The 60,000 sq. ft. Columbia Lot rose as the highest-rated site. Visit cityofhoodriver.gov/police/police-facility-planning/ for more information, including pros and cons for each site option. 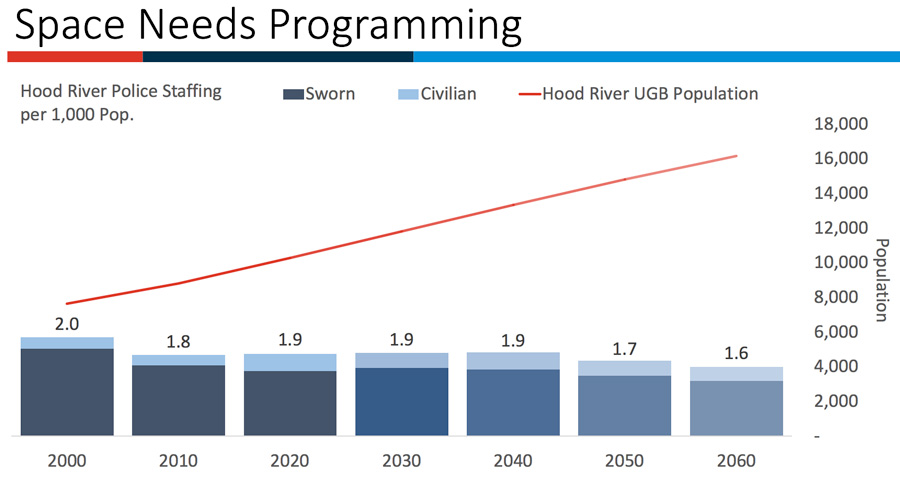 Hood River has never had a dedicated Police Station. Like a doctor in a hospital, chef in a kitchen, or teacher in a classroom, policing is a specialized field that benefits from a purpose-built facility. Since 2010, Police operations have been housed in the daylight basement at City Hall in what was originally a Fire Engine bay. Prior to that time, the Police had been shuffled between various downtown office spaces. The Hood River City Council prioritized planning for a dedicated police facility at its 2018 goal-setting session and has reaffirmed its commitment each year since. The architectural firm Mackenzie was awarded a contract in 2019 to complete a space needs analysis, site evaluation, and preliminary concept design. Recent changes in project scope mean the City will conclude the needs analysis and issue a new Request for Proposals for preliminary design and estimating based on potential cost-sharing considerations.

As the Columbia Lot site moves to design refinement for the two facility options, creation of a site plan, interior floorplan, perspective drawings with exterior character and materials, and conceptual design of building systems will occur.

Once site approval is final, City Council will decide whether to seek voter approval of a general obligation bond. The City’s 2008 Fire Station bonds retire in 2022 creating an opportunity to ask voters to extend the City’s bonding authority for the community’s first-ever purpose-built police facility without increasing taxes.

Please send questions or input by email to Will Norris, Assistant City Manager at: w.norris@cityofhoodriver.gov