After a series of public hearings before the City of Hood River Planning Commission and City Council, updated zoning regulations for Accessory Dwelling Units (ADUs) became effective in May, 2019. ADUs are smaller secondary living units constructed on a residential lot with a single-family dwelling.

Jodie Gates and Dave Sadr: “For us, it has been a win-win. Having our ‘neighbors’ in our ADU adds to the vibrancy of the neighborhood, helps provide long-term and affordable housing, and offsets some of the costs of owning a home. Plus, our dogs love having extra treat-givers around.” 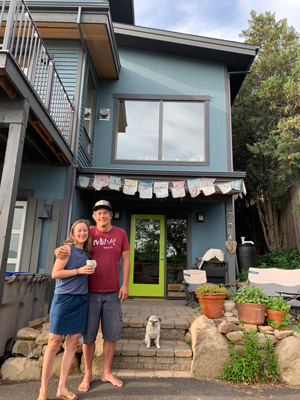 Jodie pictured with tenant Jonathan Weiss in front of the attached ADU.

“The City’s initial rules for ADUs were pretty conservative,” noted Mayor Paul Blackburn. “In 2017 the State adopted new rules and guidelines for ADUs, so we took the opportunity to revisit Hood River’s approach.”

The statewide version of modified ADU regulations was signed into law that year by Governor Kate Brown after passage of bills by the House and Senate that pertain to cities with population over 2,500, or counties over 15,000. The rationale for that law was that housing prices are outpacing employment and wage growth in Oregon, and affordable housing is decreasing in cities throughout the state.

Gary Johnson and Patty Garland: “When we were looking for a home to purchase, one requirement was that we could site an ADU on the property. Knowing that housing prices have been on the upswing, we wanted to be part of the solution by offering affordable housing as well as diversifying our income.” 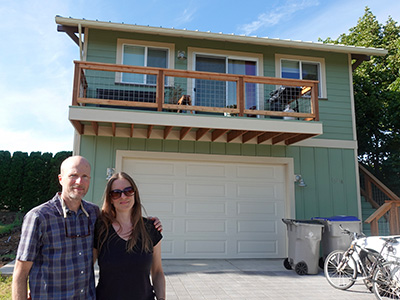 Proof of local employment for tenants proved to be a difficult issue administratively, Nilsen added. “People’s circumstances change, and enforcement can be cumbersome for all involved.”

System Development Charges (SDCs) also were identified as obstacles for ADU development. Because they are smaller and tend to house fewer people, it stands to reason that impacts of ADUs are less and they should be charged less. When an ADU shares water and sanitary sewer connections with a primary dwelling, SDCs for water and sanitary sewer system improvements are not charged for an ADU. Charges from the school and park districts remain unchanged at this time but the overall permitting cost for an ADU is significantly lower than for a single-family dwelling.

Many elements of the City’s original ADU regulations were retained. While the components that are measured have been clarified, ADUs cannot exceed 800 square feet of living space. Only one ADU is allowed per lot, located either inside, attached to or detached from the primary single-family residence (ADUs are not permitted with other types of housing such as duplexes or townhomes). Further, recreational vehicles are not permissible as ADUs.

Kristie Mitchell: “I’ve rented my ADU for 10 years now. It’s provided living space for a number of long-term renters working in the community. There’s so much interest in this type of housing I always have a waiting list.” 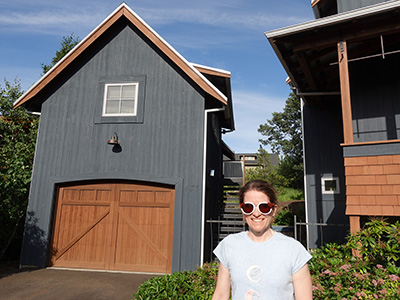 Kristie Mitchell, pictured at her home in the Willow Ponds, with an ADU above a detached garage.

The Hood River Housing Strategy is organized into three broad strategic areas: increasing residential land use efficiency, regulation of secondary housing and short-term rental housing, and development of affordable housing. In 2016 the City began requiring licenses and permits for short-term rentals, and the updated ADU regulations continue to prohibit use of an ADU as a short-term rental.

Common issues may still prevent a property owner from obtaining permits for an ADU, such as an existing building not meeting current setback standards. Building, plumbing, electrical code, and fire separation requirements also may present challenges for establishing an ADU in an existing home.

Homeowners who have established guest units are encouraged to check into converting units into code compliant ADUs, as the updated zoning regulations may make development more feasible. For property located in the City, owners should contact the Hood River planning department first about obtaining a zoning permit, and also follow up with the City’s building, and engineering departments to verify building permit requirements. 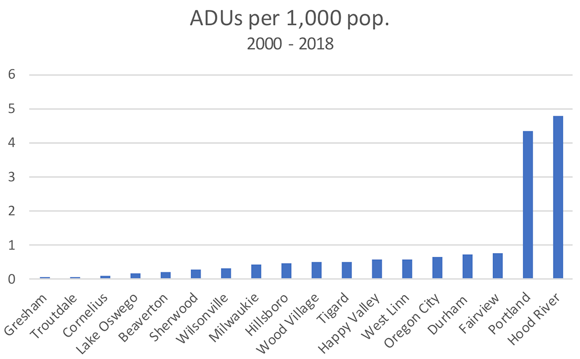 Nilsen says making it easier to comply to ADU code should result in more housing options for Hood River’s residents. Since 2007, only 38 ADU permits were approved under the original, more stringent regulations. Despite the low numbers, Hood River trails only two jurisdictions in quantities of ADUs: Portland (2,686) and Hillsboro (47). When population is factored in, Hood River has the highest number of ADUs per capita. With an average of five ADU permits approved per year the past three years, Nilsen thinks it’s conceivable the rate of ADU development could double under the new standards.

“The planning commission and city council deliberated thoughtfully on these changes, and councilors agreed, ‘if it doesn’t work we will revisit.’ ADU regulations are not indelible to change,” Nilsen concluded.

City code began allowing ADUs in 2007 and modified the ordinance in 2016 when short-term rental (STR) regulations were added independently to the Municipal Code and eliminated from ADU codes.