While CDP/CCHC remain optimistic about the outlook of this project, affordable housing developers in Oregon are experiencing a variety of challenges. Four of the primary challenges are summarized below, and CDP/CCHC will continue to track these closely to understand how heavily they will impact this project:

If LIFT funding is secured, a formal development agreement will be prepared and CDP/CCHC will apply for land use permits. Housing could be ready as early as 2025.

In January of 2020 the City purchased a seven-acre parcel at 780 Rand Road in Hood River for the purpose of developing affordable housing.

In the autumn of 2020 the City contracted with Leland Consulting Group, DDV Consulting and Urbsworks to prepare a development strategy for the site and a developer solicitation. Goals were established by the city council, and the consultant team met with stakeholders before preparing four preliminary development alternatives.

In the spring of 2021 a StoryMap and a brief survey were used to obtain public feedback, and the preliminary development alternatives were refined for use in developer-solicitation documents.

In the autumn of 2021, after a competitive solicitation process, Community Development Partners (CDP) and Columbia Cascade Housing Corporation (CCHC) were selected as the City’s preferred development team to build affordable housing at 780 Rand Road.  The City and CDP/CCHC completed a Purchase Option Agreement in February of 2022, needed to qualify the developer for state and federal funding sources.

City Council expects CDP and CCHC will employ their creativity and development expertise with respect to site- and building design, and financing and deal structuring, to deliver housing on the site consistent with the City’s goals.

The City of Hood River purchased the property in January 2020 for $1.2M. The Oregon Business Development Department granted $410,000 for the purchase and the remainder was financed by the City. Construction Excise Tax is a repayment source, and other funding sources include local, state and other community partners.

At the time of purchase the City committed to development of at least 50 housing units for households earning at or below 120% of area median income. Since that the time the city council refined its primary goal and identified additional goals. 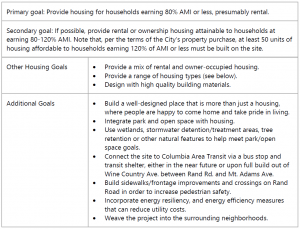 Following adoption of a Housing Needs Analysis in 2015, the City developed a housing strategy and established goals of creating opportunities for a more inclusive and diverse housing inventory.  Elements of the Housing Needs Analysis were updated in 2019, and updated housing income and affordable data is included in a 2022 Affordable Housing Strategy.  Key points about housing affordability include: 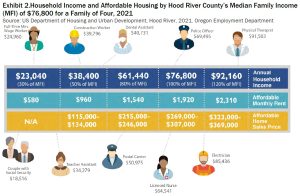 The aerial photograph below depicts Hood River’s city limits (dashed blue line) and Urban Growth Boundary (dashed red line). The 780 Rand Road site is highlighted in yellow.  It is in close proximity to many businesses along Cascade Avenue (US Route 30, the Historic Columbia River Highway), as well as the site of a future school. 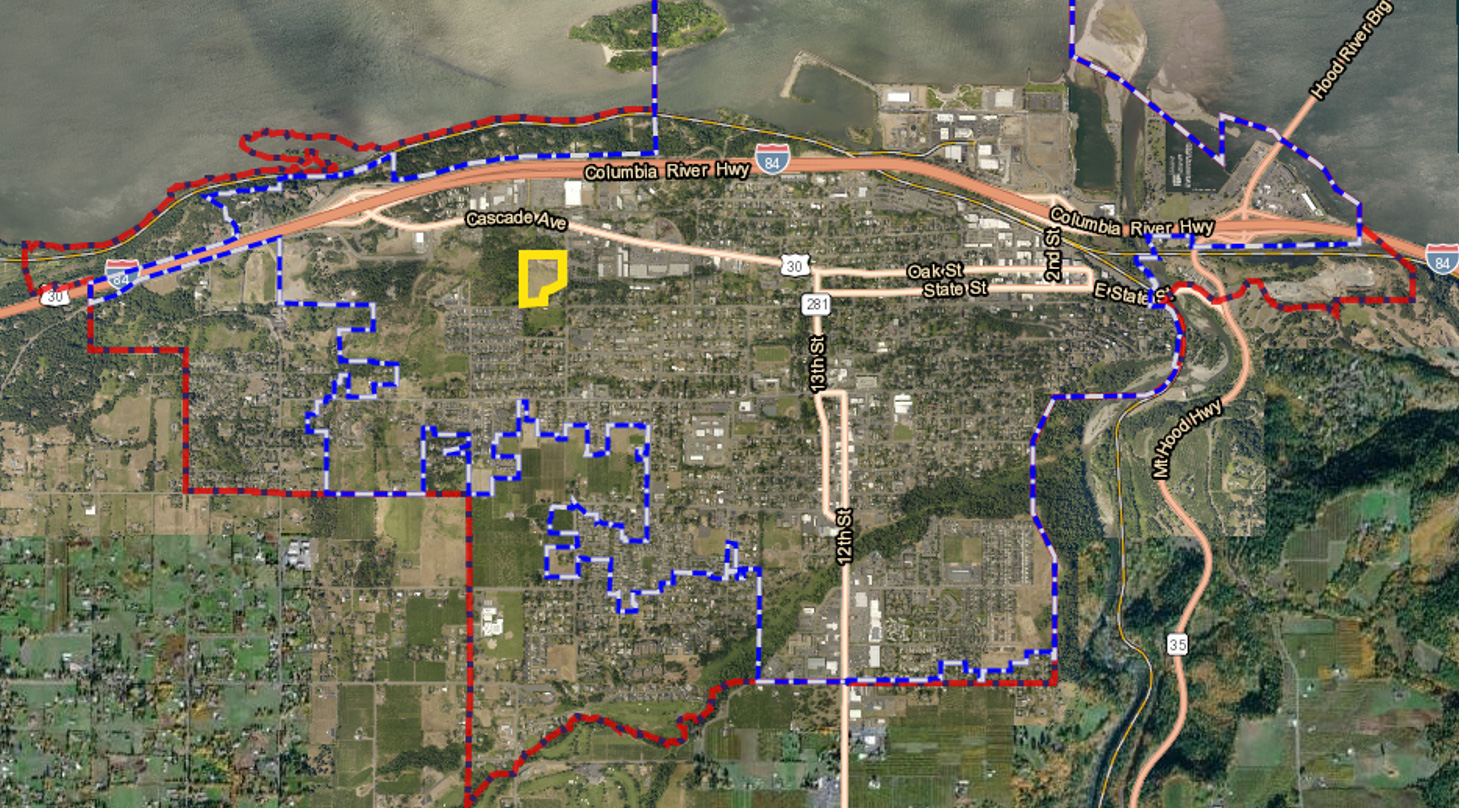 Preparation of preliminary development alternatives included evaluation of zoning, utilities, topography and natural features on the site and in the surrounding area, as well as the City’s capital facilities plans for public infrastructure. The Village at Rand Hill neighborhood is located immediately east of the site, and the Maley Subdivision is located to the southwest. There are undeveloped properties to the west and south, and partially developed properties to the north. Public utilities including water, sanitary sewer and stormwater facilities are available to serve the site, but new roads and other infrastructure will need to be constructed. Wetlands and steep slopes will affect where housing and other improvements can be constructed on the site.

In the spring of 2022, the property was rezoned to Urban High Density Residential (R-3) in its entirety.  And, PBS Engineering completed a wetland delineation report. The report shows that the extent of the wetlands identified by PBS are reasonably consistent with the wetlands identified in previous analyses for the site, and CDP/CCHC do not expect the extent of wetlands to significantly change the site plans shared with City to date.  The wetland delineation will be reviewed by the Department of State Lands (DSL) and the US Army Corps for their concurrence. 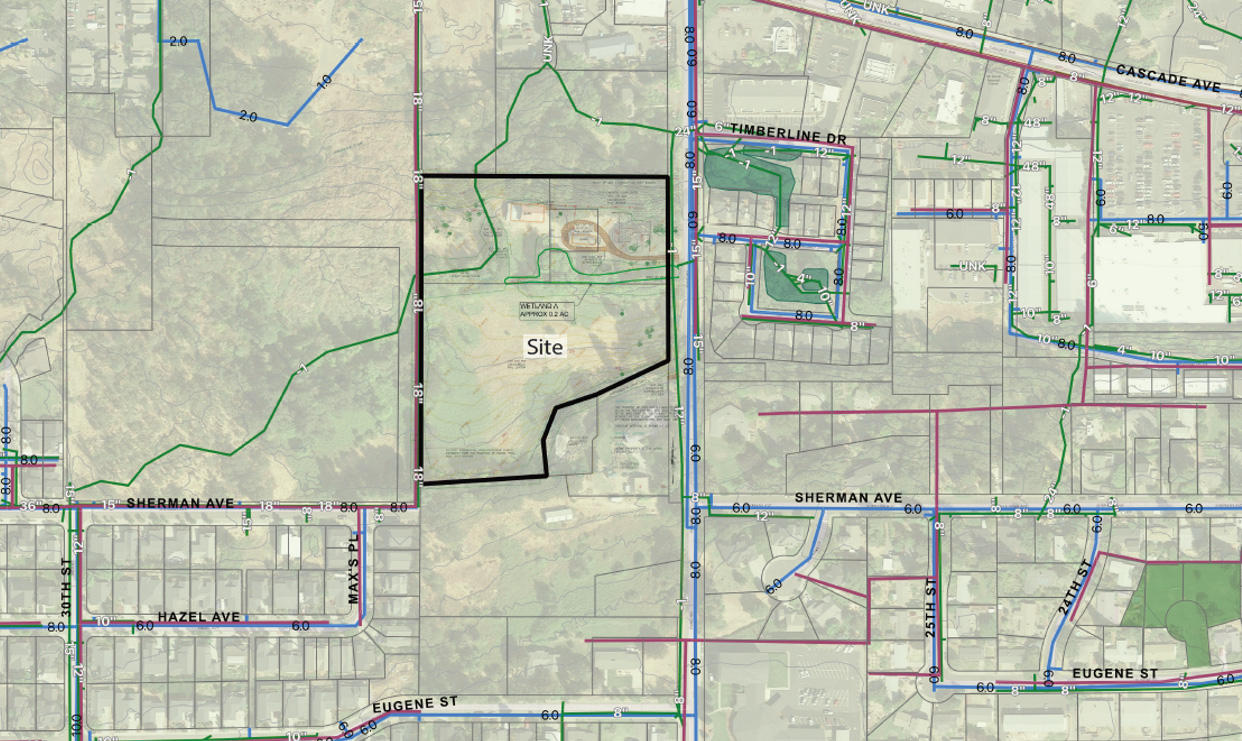 The images below describe a variety of housing types. The City anticipates development on the site will feature multi-family housing (apartments) and townhouses for rental. Shared-equity home ownership (rowhouse/townhouse in a Community Land Trust) remains desirable but does not appear to be economically feasible on this site.

The developer selection process began in July of 2021 with a Request for Qualifications to affordable housing developers. Seven well-qualified firms responded and the City short-listed BRIDGE Housing Corporation and Community Development Partners (CDP) to respond to a more detailed Request for Proposal (RFP) in September. The RFP outlined City Council’s project goals which included not only development of affordable housing but also environmental sustainability, energy resiliency, community engagement, and park and open space. Both BRIDGE and CDP proposed developing over 120 units of housing for households earning between 30% and 60% of Area Median Income on the City’s parcel.

On November 22, 2021, City Council selected CDP as the preferred developer for the City’s 780 Rand Road affordable housing project. CDP is partnering with the Columbia Cascade Housing Corporation, the development arm of the Mid-Columbia Housing Authority.

The overall process for development of the site is expected to occur like this: 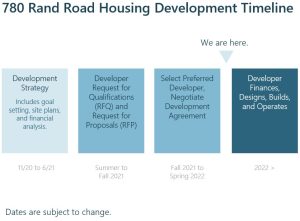