Hood River Garbage will restart recycling services in the City of Hood River on July 1 pending final City Council approval of a 2.61% recycling surcharge that will make it possible for the company to move some materials to recycle processors in Portland.

Hood River Garbage, a transfer site for three jurisdictions, presented alternatives to the City in April for recycling options, which Council approved provided the City of Cascade Locks and Hood River County also authorized the changes, which they have.

Jim Winterbottom, district manager of Hood River Garbage and The Dalles Disposal, said they had hoped the surcharge would cover the full additional cost of sending commingled recycling to a material reuse facility (MRF), but it turns out it will only partially cover costs. 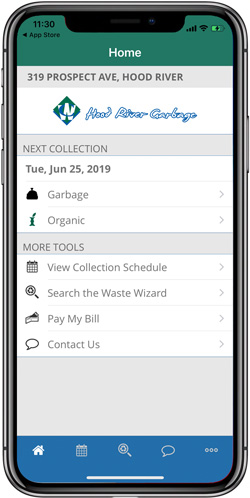 Another change is that recycling of plastics will be limited to numbers 1 and 2 only, in addition to mixed paper, cardboard, tin, and motor oil for curbside pick-up. Larger volumes, plus other recyclables like scrap metal and batteries can be brought to the transfer station.

Hood River Garbage will no longer accept hard plastics (numbered 3 through 7) at the request of the MRF in order to make its comingled recycling more marketable. “Plastics 1 and 2 are by far the greatest volume and weight, and therefore more viable,” Winterbottom explains. “Plastics 3 to 7s are only useful in large quantities separate from the comingle stream, so they end up as leftovers, often landfilled.”

Hood River Garbage has been landfilling commingled recycling, which includes tin, paper and plastics, since October 2017, when China announced it would discontinue importation of plastics and unsorted paper due to high levels of contamination. The company asked customers to continue to sort recyclables during this period to maintain recycling sorting habits.

Since those habits must change slightly, the company now has added an interactive feature on its website and introduced a smartphone app — WasteConnect — that allows users to view garbage collection schedules and search for info on acceptable and unacceptable recycling items in a “waste wizard” search bar. The WasteConnect app is available for free download at the App store. 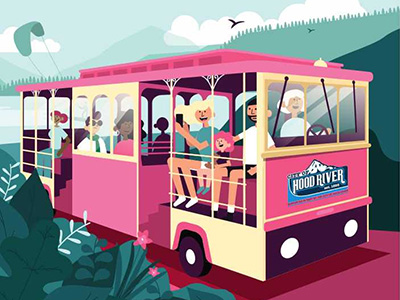 The popular Pink Trolley is back for the summer

Hood River’s newest public transportation option, the open-air pink trolley, is back for summer service. The trolley carries people on a fixed route through Hood River with scheduled, convenient stops.

“The first weekend of the trolley was a great success with over 200 people boarding on Saturday and Sunday,” shared Patty Fink, executive director of Columbia Area Transit (CAT). “We are pleased that community residents and business members continue to ride and support the trolley and look forward to making it a summer tradition.”

The pink trolley runs Saturdays and Sundays through September, following the same route service available Monday through Friday via the CAT bus. Pedestrians may also flag down the vehicle with a wave from a safe spot for unscheduled pick-ups. The trolley service is free, and partially funded by the City of Hood River.

Offered donations are dedicated to Hood River Shelter Services which operates Hood River’s Warming Shelter during winter months. For details on the weekend trolley routes and schedule, visit their website or call 541-386-4202.

Intersection improvements for West Cascade at Rand Rd. have long been identified for enhanced safety and functionality, and the project is now in the works. The City of Hood River is partnering with Oregon Dept. of Transportation (ODOT) to rebuild the intersection since Cascade Ave. / U.S. 30 is a state highway.

This intersection has been challenging for both vehicles and pedestrians and has a history of vehicle collisions. The project will line up the north / south approaches to the new intersection, eliminating the current offset that makes it difficult for vehicles to cross Cascade Ave. safely at Rand. It will also improve accessibility for pedestrians, including those with disabilities.

“This location has been identified as a pedestrian crossing need for close to 20 years,” explained Director of Public Works Mark Lago. “By collaborating with ODOT we’ll be able to make more significant improvements in both safety and operations.” Numerous improvements are identified in the City of Hood River Transportation System Plan, published in 2011.

The design process continues through fall 2020 with construction scheduled from winter 2020/2021 to fall 2021. “Because of our partnership with the City, this long-identified project will become a reality,” said Cari Charlton, ODOT’s Project Manager. “We’re excited to be able to improve the safety and utility of the intersection for all modes of travel.”