The City of Hood River’s high-quality water comes from a pristine groundwater source consisting of three springs located approximately 15 miles southwest of town on the slopes of Mount Hood. Cold Springs are located on approximately 23 acres of City-owned property near Lost Lake. It is estimated that the springs can continuously provide at least 10 million gallons of water per day. Currently, the City is only able to harness and use around five-million gallons of water per day. Water travels through a transmission main originally constructed in 1929 and has had numerous pressure zones and areas which have been rebuilt to facilitate the conveyance of water to a five-million-gallon reservoir. From the reservoir, water travels through approximately three more miles of parallel 14-inch and 16-inch mains to serve the City’s distribution system and two more reservoirs. The three reservoirs provide a total of nearly six million gallons of storage capacity for firefighting and service outages.

Prevent frozen/broken pipes. You can save yourself the hassle and cost of emergency repairs by taking a few simple steps to reduce the risk of burst pipes before freezing weather sets in:
The following flyers describe measures you can take: 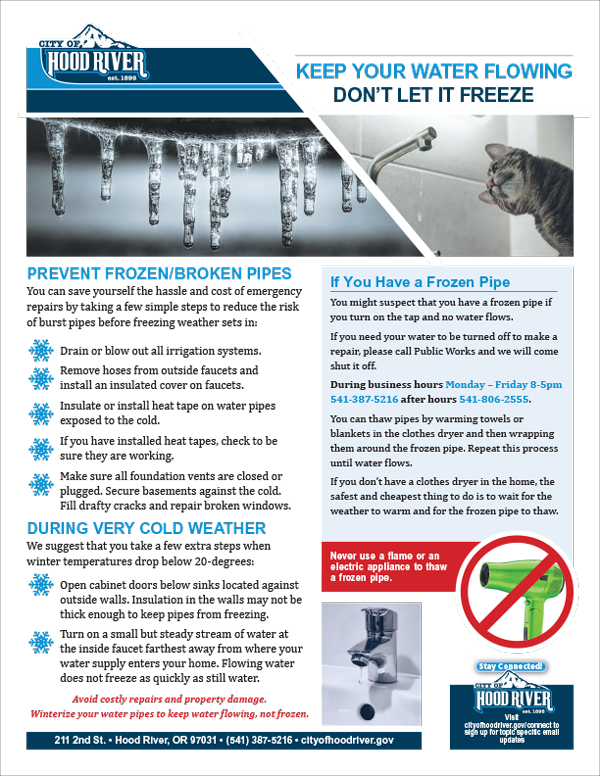 The City of Hood River aggressively pursues a cross connection control program to protect its water customers from foreign substances in the water system.  Section 12.02.250 of the Hood River Municipal Code (HRMC) identifies the backflow protection required by the City in conformance with State of Oregon law.
A flyer describing requirements and types of devices is available here

Questions regarding cross connection requirements, including backflow prevention device installation and testing requirements, may be directed to the Public Works Department at 541-436-0040. 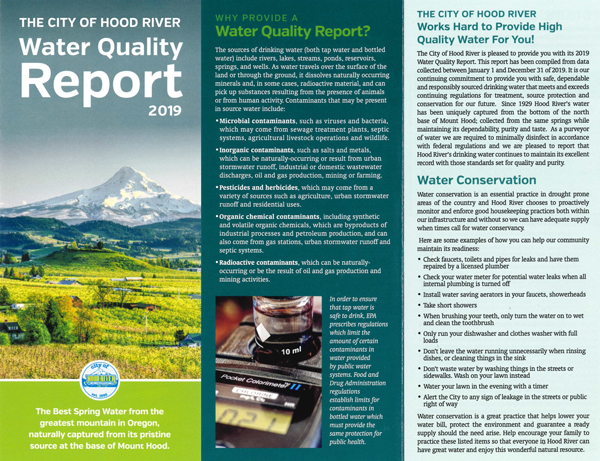 As required by State law, the City of Hood River prepares an annual report on its water quality, listing any potential contaminants that might have been detected during preceding test periods.  The frequency of testing varies from daily to every five years depending on the substance.

The most recent Water Quality report is available here

Reports from previous years may be viewed online or obtained by print for a minimal fee at the Public Works office at 1200 18th Street.

Water connection fees consist of the system development charge (SDC) plus the connection fee.  Fees are based on the size of the water meter.  Most residential users have a ¾” or a 1” meter.  Usage charges for residential customers having a ¾” meter consist of a base charge, which includes the first 5000 gallons of water used and a commodity charge of $2.56 per 1000 gallons or fraction thereof used above the first 5000 gallons.  For larger meters, there is no flow included in the base charge and all usage is billed at the rate of $2.56 per 1000 gallons or fraction thereof used.

This page managed by: City of Hood River Engineering