The City of Hood River was incorporated 125 years ago — February 15, 1895. Originally Hood River was part of Wasco County. The town was first platted in 1881 and later became the county seat when Hood River County formed in 1908. Extra! Extra! Read more about it! Click thru for historical records of the process to incorporate.

The City of Hood River was incorporated 125 years ago — February 15, 1895. The town was first platted in 1881 and was first part of Wasco County. Hood River later became the county seat when Hood River County formed in 1908.

The residents of the town started the process late the previous year when they petitioned and later voted (47 in favor, 35 opposed) to petition the Wasco County Court to incorporate. At the same election they selected a mayor, six aldermen, a recorder, a marshal, and a treasurer. On Monday, February 18, 1895 the Hood River City Council held its first official meeting, at which they adopted four ordinances organizing the city government.

According to Arthur Babitz, Hood River historian and former Mayor, “The following month they got down to business enacting laws. The first issue they tackled was creating a requirement that persons with contagious diseases stay in their homes, marking them with flags visible from the street. A green flag indicated diphtheria, yellow indicated small-pox, and red indicated all other contagions. They also prohibited sale of putrid or tainted meat, fish and vegetables, and prohibited leaving decaying animal carcasses in such a condition as to cause or create noisome or offensive odors.”

We’ve included images of some records of the process to incorporate from the Hood River Glacier in 1894 and City Hall. Appreciation goes out to Arthur Babitz for historical records and The History Museum of Hood River County for the photograph of Oak Street in 1895. 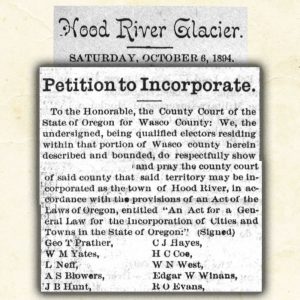 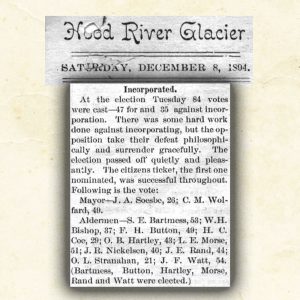 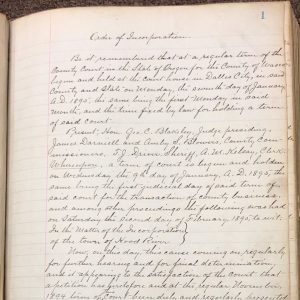