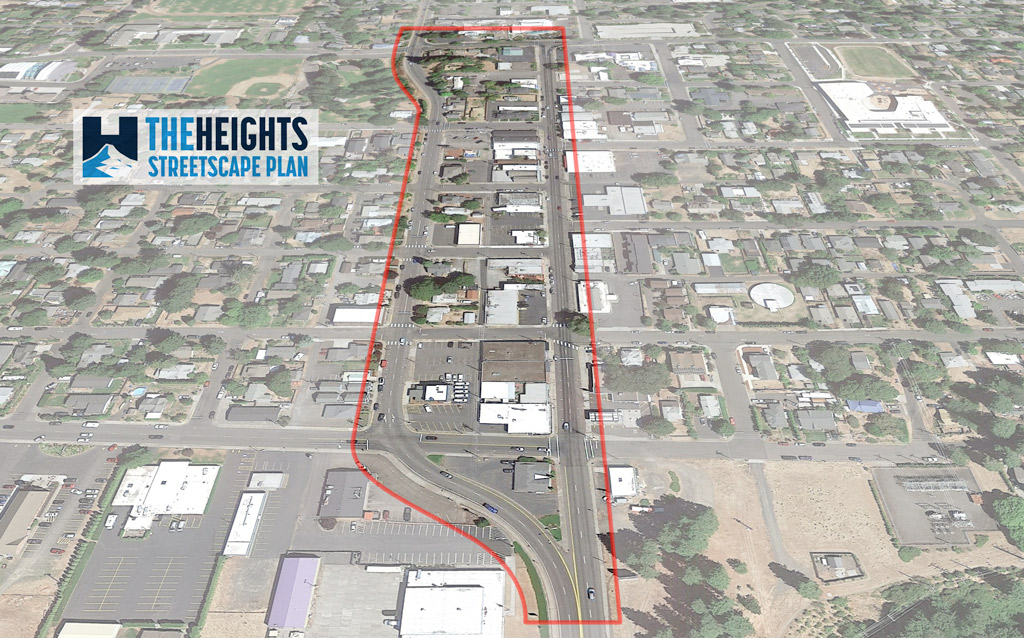 Developing a new streetscape design for the Hood River Heights urban renewal project is in phase two. This phase includes studying and refining three initial design concepts and evaluating the concepts with the public and community partners. This input will be used to create a final preferred design in phase three of the project.

“All three concepts represent possible outcomes and are based on input we heard from the community and goals adopted by the Agency Board in the first phase,” explains City Planning Director Dustin Nilsen. “It’s exciting to have goals and visions translate into these alternatives. Next we’ll look at technical issues and the real-world trade-offs and implications of each design option.”

The final design, completed in the next phase, could include aspects from all three concepts. The purpose of input is not to declare a single design as “best.” Rather it’s to find which design features are most appealing and could be combined for a final design. 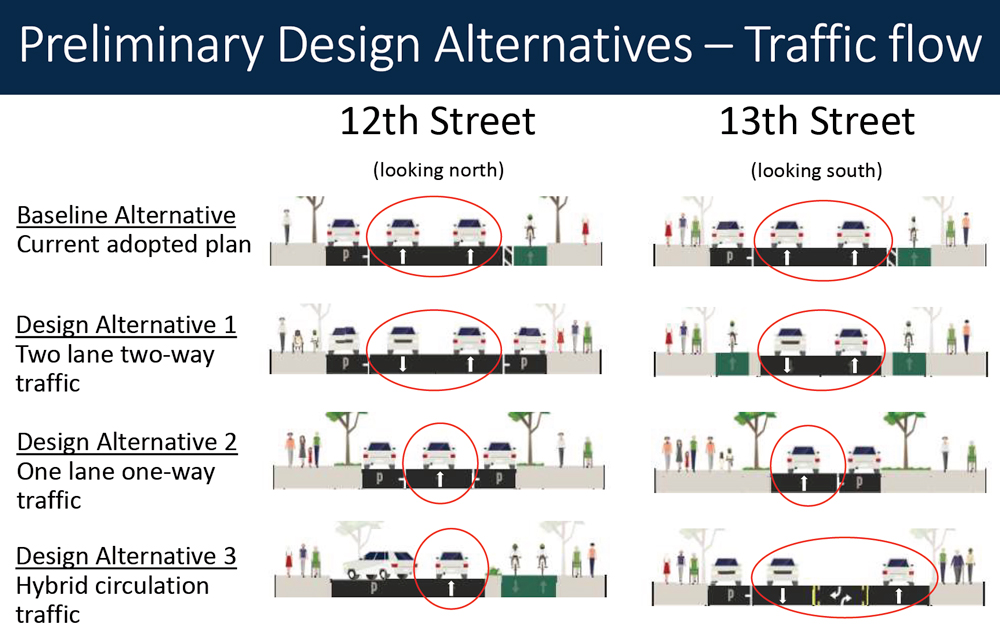 Each option changes traffic flow through the Heights and would require changes to the City’s adopted Transportation System Plan (TSP) as well as approval from the Oregon Department of Transportation (ODOT). It’s anticipated that congestion for vehicular traffic will increase with all of the alternatives. Safety was identified as a community priority and is a key element of each of the three project concepts.

Next steps will be for the project team to meet with ODOT to receive feedback on design choices, continue technical and practical reviews and evaluation of each option, plan community outreach, an online and in-person community open house and targeted stakeholder engagement. These tasks should be achieved in early 2022, after which the project team will present recommendations to the Urban Renewal Agency Board to prepare for the final phase of design. 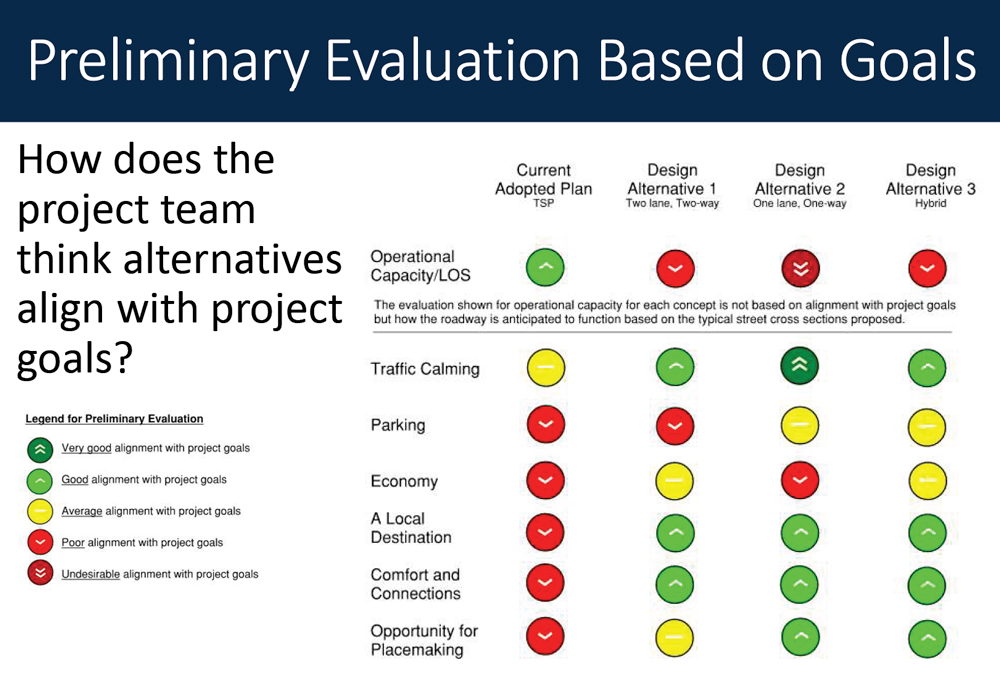 Each of the three design alternatives have been evaluated for alignment with the Agency’s adopted project goals and next will go through a technical traffic and parking analysis before formal presentation for public feedback. Further detail is available in the October URA meeting packet.

This concept converts one-way traffic on both 12th and 13th to two-way traffic. 12th Street would function more like a traditional “main street,” with parking on both sides of the street. 13th Street would function as a “mobility” street that focuses on moving people driving and biking through the area. One-way bike lanes would be separated from the roadway with a curb. Intersections at May and Belmont would be controlled with traffic signals.

This option reduces 12th Street and 13th Street to one lane of one-way traffic in each direction. This design was developed to slow traffic through the area while providing protected space for walking and biking, and on-street parking on both streets. A mini roundabout at 13th and May and a double roundabout at Belmont would reduce traffic flow impacts better than traffic signals.

This concept converts one-way traffic on 13th Street to two-way traffic with center turn lane while keeping one-way traffic on 12th Street. 12th Street is designed as a “people street” with diagonal parking, a two-way protected bike lane and spaces for gathering. 13th Street is designed to function as more of a “through street” with a center turn lane and on-street parking. Intersections at May and Belmont would be controlled with traffic signals. 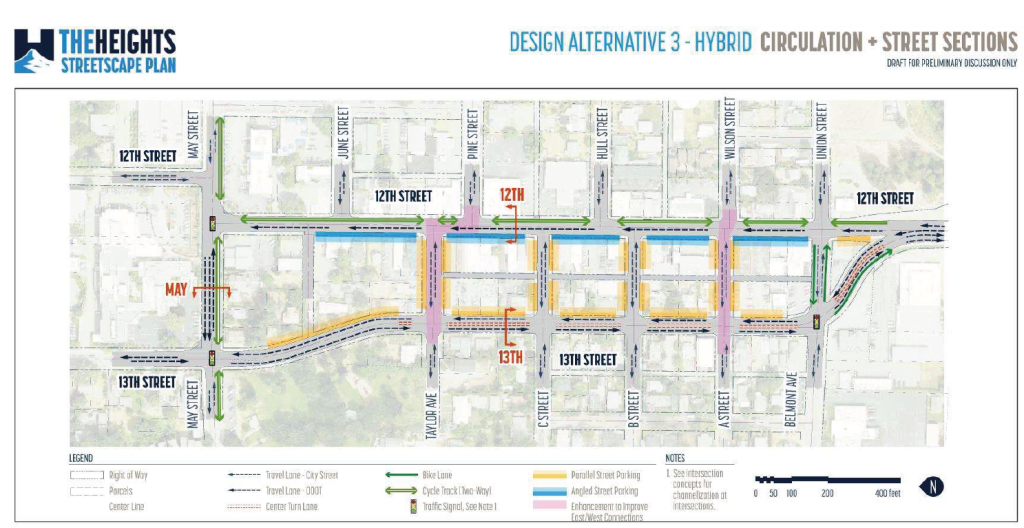 About the Heights Urban Renewal